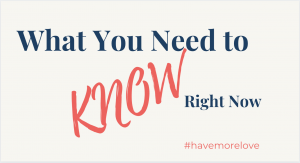 There are some basic things you need to know to have the loving relationship you really, really want – whether you’ve never been married, or you have been and aren’t anymore.

You are lovable and worthy and absolutely deserve a healthy, supportive, loving, happy romantic partnership with the man you choose. You don’t need to prove anything to anybody, you don’t have to convince anybody, you don’t have to do anything but love. Love yourself, love men, love other humans in general, and learn to love the process of dating, because it’s through this process that you will meet your right match.

I want to let you in on a little secret … you might not be ready to love dating, but the truth is you can learn to enjoy it, and that might snowball and you might start to have fun … and if you have fun dating, who knows what might happen? 😉

One key to changing your outcomes in love and relationships

Although the early stages of any love relationship are similar, when you’ve never been married you may be having different experiences of dating than women who are dating again after divorce.

I used to get a lot of questions from men who were, quite honestly, suspicious. One guy on a date said, “You’ve never been married? What’s wrong with you?”

Nothing. Nothing at all, I said. I simply never chose to marry any of the men I’d dated, because I knew none of those relationships was meant to last.

Although I had plenty to say about that guy at the time, none of it printable here, I have to admit he was sent to be my teacher. I meant the things I’d said, but his attitude made me want to hide. The interaction propelled me to an important key in my evolution – asking the important questions like, if I really wanted to be married, why was I dating men who weren’t potential husbands? Obviously what I’d been doing for years – putting the focus on the men – was not helping me figure that out.  What I needed to do was invest my time and energy, and eventually money, in loving, gentle, thorough self-exploration. And I didn’t stop until I’d come up with the true answers.

Another key to creating the love you want

When I spent the time to figure out why I was dating men I didn’t want to be married to I realized something. I wasn’t sure if I wanted to be married at all!

That really is amazing, isn’t it? I mean, who doesn’t want to be married? Ummm, turns out lots of people!

I’d gotten so used to the idea that everybody gets married and that women are supposed to get married and are supposed to want to get married, that I never once stopped to wonder if I personally really wanted to be married. I never questioned it until the moment the man across the table on that first and only date claimed that both of his ex-wives just suddenly decided they didn’t want to be married any more, with absolutely no warning, and then suggested something was wrong with me.

Before you ask – no, it wasn’t easy to be civil when I wanted to toss my water in his face and stalk off. Although, since I was going to wake up with myself in the morning I didn’t want to have any regrets – so I plastered on a smile and bided my time until I could get in my car and get myself home.

Do the work to figure out what you want and create that, no matter who else in the world has something to say about it. At the end of your time here on this planet those naysayers will be nowhere to be found. It’s all you.